image goes here
Alvington : One of a series of small hamlets that grew up along the Roman military coast road that led from Newnham to Chepstow, Alvington was a manor by late Saxon times and in the Doomsday Book survey of 1086 it had in Lordship (i.e. under control of the Lord of the Manor) 2 ploughs; 12 villagers with 9 ploughs; they pay 20 looms of iron and 8 sesters of honey'. As with some other places in the Forest, Alvington was originally part of Herefordshire and it only became part of Gloucestershire in the 13th century when it was absorbed into the Bledisloe Hundred and made a separate parish.

At this time, the manor and much of the parish was owned by Llanthony Priory in Gloucester and Alvington Court, a 16th century Elizabethan house that lies east of the village along Court Lane was probably built on the site of an early grange of the Priory. The oldest building in the village is the Church of St Andrew, built by Llanthony Priory around 1140 at which time it was dedicated to St Mary. Its dedication was changed in 1523 and in 1858; the church was radically restored, losing much of its original stonework apart from one small Norman window in the chancel.

Alvington is located on the lower slopes of the Severn escarpment, about 5 kilometres south-west of Lydney. It is bisected by the A48 trunk route. The village originally developed in a linear form along the main road. This part of the village is still characterised by older terraced properties along the A48. To the north of the A48, more recent development has taken place off Clanna Lane including an estate of over sixty houses. To the south-east of the main road, development occurred initially in the form of small cottages in large plots. Subsequently, a variety of bungalows and houses have been constructed in this area, although it still retains an open spacious character. The minor roads in this part of the village are generally unsuitable for additional traffic, and their junctions with the A48 are unsatisfactory. The majority of the village lies within a Conservation Area.

Photo from Featured Project near Alvington,, Forest of Dean, Gloucestershire
What a difference a door makes!
The back door on this local office in Shirenewton had been neglected for some time and was in a pretty poor state, being eaten by various fungi and not holding up well under the strain.

With a new tenant in the office, which had been empty for a while, the door chose the middle of all the tropical storms we have been having to finally give up the ghost and let the elements in.

Changing a door is not the biggest or most pressing job in the world, but it was important to the tenant to keep the elements out of his workplace, so we quickly got him a new uPVC door and surround, taking the opportutnity to widen the entrance a bit for better access and fitted it in a day. Being uPVC, it will be less susceptible to the elements now, and the light oak colour is a lovely match for all the rest of the doors on the farm estate.

So, if your home has been suffering from the recent inclement weather, even if it is only a door, or a window, give us a call or drop a line to get it attended to efficiently before the weather can do any more harm. 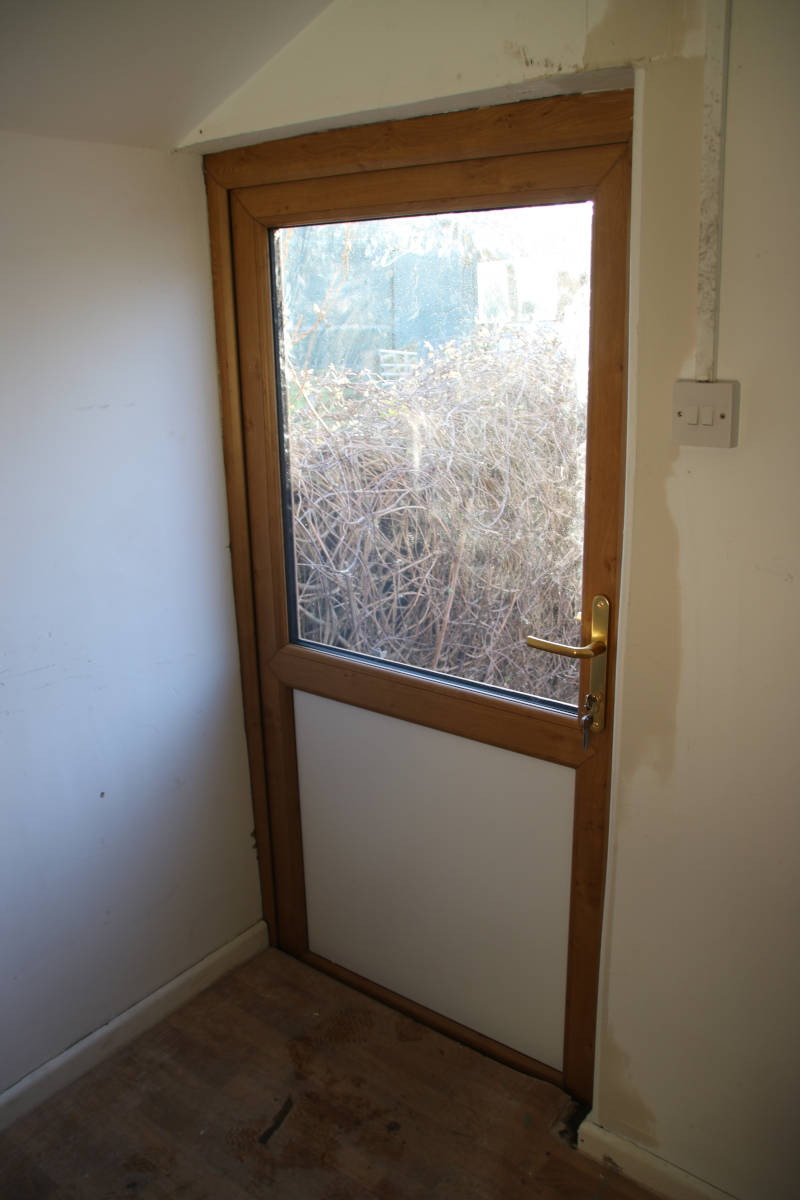